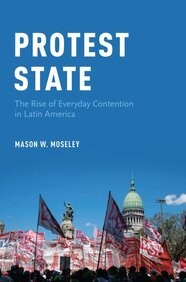 Protest State: The Rise of Everyday Contention in Latin America
Oxford University Press
​
​Why is protest a normal, almost routine form of political participation in certain emerging democracies, but not others? In light of surging protests in countries across the developing world, this book answers this question through a focus on recent trends in the quality of democratic political institutions and socioeconomic development in Latin America. I that increasingly engaged citizenries, forged by economic growth and technological advances throughout the region, combined with dysfunctional political institutions have fueled more contentious modes of participation in Latin America, as citizens’ demands for government responsiveness have overwhelmed many regimes’ institutional capacity to provide it. Where weak institutions and active citizenries collide, countries can morph into “protest states,” where contentious participation becomes so common as to render it a conventional characteristic of everyday political life.

​Drawing on cross-national surveys from Latin America and a case study of Argentina, which includes a rich dataset of protest events and dozens of interviews with political elites and citizen activists, I test this explanation against other leading theories in the contentious politics literature. Rather than emphasizing how worsening economic conditions and mounting grievances fuel protest, this book builds the case that it is actually the improvement of economic conditions amidst low quality political institutions that lies at the root of surging contention in the region. In presenting and systematically defending this novel approach, Protest State: The Rise of Everyday Contention in Latin America offers a comprehensive multilevel, mixed-methods study of one of the most intriguing puzzles in Latin American politics today: In the midst of an unprecedented era of democratic governments and economic prosperity, why are so many people protesting? 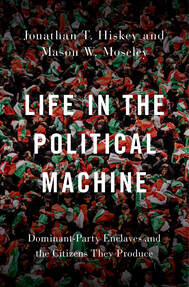 ​Life in the Political Machine: Dominant-Party Enclaves and the Citizens They Produce
(with Jonathan T. Hiskey; Oxford University Press)

​Whether in the northern provinces of Argentina, the central states of Mexico, or the southern states of the United States, less-than-democratic subnational regimes are often found within democratic national political systems. However, little is known about how or if these subnational pockets foster political attitudes and behavior that threaten the democratic norms that exist at the national level.

Life in the Political Machine offers one of the first systematic explorations of the ways in which subnational "dominant-party enclaves" influence citizens' political attitudes and behaviors through a focus on the provinces and states of Argentina and Mexico. Specifically, the authors find starkly divergent patterns of political attitudes and behaviors among citizens in dominant-party enclaves as opposed to those living in competitive multiparty systems. In the latter, the authors find a political culture that approximates what scholars have long documented in established democracies. In the former, they uncover three factors--the politicization of the rule of law, an uneven electoral playing field, and the partisan cooptation of state resources--that strongly shape citizens' understanding of democratic principles, accountability, and political participation. The authors argue that this environment erodes public support for democracy at the national level and that these local strongholds of illiberalism thus provide added fuel to the recent drift from democracy globally. Ultimately, this book calls for greater attention to subnational variations in citizens' political attitudes and behaviors in order to more fully understand the process through which a national democratic political culture can emerge.
Proudly powered by Weebly